For the past two years now. Around the month of December, 2018, in the early term in office for the newly United States of America’s President. It has all been demonstrations upon demonstrations. Charges upon charges.

Is the president battling with Angels? Haved anyone asks before where all those charges are coming from? Are they realities? And why President Donald J Trump? Ask again. Whether you’re being insighting by someone, and why someone want you to think as they think?

This president is still ruling his country without any peace and comfort and he’s able to be on his feet for almost 4 years now! I wonder how someone could be on his feet to rule like nothing is happening or going on against him. But this is what Donald J Trump has done; and still doing. Upon everything, I think his spirit of strength needed to be adopted by people who want to lead.

I’m not saying the American president is perfect, I’m rather asking, when talking about Trump, people want others to think as they’re thinking about him. And why I’m asking a lot of questions is that, immidiately after his elections there were people that vowed and promised “this president is not going finish the four year terms”. And gave a lot of explanation which I think was not right and tangible and unfair. I wonder why people try to abuse others with their rights, whiles no one’s rights suppose to abused other people’s rights.

Whenever someone is trying to convinced you to with their thoughts, There’re hundred of questions that you need to ask yourself and also the persons before before going into any conclusion.

President J Trump has also causes a lot of damages to himself through his own words? Yes he has done that. About his thought on women that whether someone he was with, intensionally picked him up or it was a mistake. No matter how anyone will prefer identify it. And also with other decisions.

The president has had, and is still having a tougher times in his governing. His travelings became all about demonstrations and brouhaha of full of misunderstandings and ‘violence’ which to me personally I don’t get where all those thoughts are coming from against the president. Which I continue to ask. Is there anyone trying to let people to think as they want. From his visit to the Bush Snr. funeral to his Britain visit, all people needed to be ‘advised’. And all what people were rather looking forward was only the negative sides, like there isn’t going to be anything positive or there’s no anything positive than what they highlight to the public.

This is a throw back for you during his visit to George Bush Snr. funeral

George W Bush in sad mood because H. W Bush is gone forever; which is the old man’s old man is gone

Former President Bill Clinton and Hillary Clinton sat two seats away from President Trump and first lady Melania Trump – in the first gathering of the four since Inauguration Day.

Hillary Clinton looked resolutely ahead during their arrival at Washington National Cathedral even as the first couple walked by her to take their seats.

Hillary Clinton ignored Trump, her 2016 rival, when he arrived for Bush’s funeral
President Donald Trump and first lady Melania Trump being led to their seats in the front row of the National Cathedral, walking past their predecessors
Trump shook hands with Obama
They were all gathered to pay tribute to the late President George H.W. Bush, who would become like the father Bill Clinton never had.

Next to her was former President Barack Obama, former first lady Michelle Obama, and then Bill Clinton with Hillary Clinton beside him.

MelaniaTrump shook hands with the Obamas and Bill Clinton when she arrived at the row of seats.

President Trump shook hands with the Obamas only.

Trump ‘cut a deal with the Bush family over the summer promising he would NOT be targeted during George H.W.’s funeral’ – as 41’s grandson says the service will become a ‘unifying event’
All the former presidents sit together at George H.W. Bush’s funeral as Republicans and Democrats rub shoulders with Supreme Court Justices, sports stars, Prince Charles, and dozens of former cabinet members for ceremony
A nation unites to mourn a warrior, a statesman and a father: Presidents and politicians come together in tribute to George H.W. Bush as his son cries for ‘the best father a son or daughter could ever have’

The Obamas and Trumps shake hands in show of unity at George H.W. Bush’s funeral despite open feud between the president and his predecessor

The atmosphere seemed tense as the row of leaders awaited the casket carrying the remains of the former president.

They all stared straight ahead and did not speak.

Former President George W. Bush shook hands with the entire front row when he arrived with his father’s casket.

He sat across the aisle from the row of presidents with his family but, before he took his seat, he walked over to shake hands with the Trumps, the Obamas, the Clintons, former President Jimmy Carter and former first lady Rosalynn Carter.

Such a gathering of presidents and former occupants of the Oval Office has not been seen since Trump was inaugurated.

He defeated Hillary Clinton in a bitter election where she won the popular vote but he won the electoral college vote.

Vice President Mike Pence did greet the Clintons upon his and his wife Karen’s arrival at the Cathedral, which was before the Trumps arrived. He shook hands with both Bill and Hillary Clinton.

Hillary Clinton stares straight ahead as the Trumps arrive to take their seats
Melania Trump shook Bill Clinton’s hand when she arrived but President Trump only shook hands with the Obamas
Vice President Mike Pence shakes hands with Bill Clinton upon his arrival at the Cathedral
President Trump and Melania Trump arrive for the funeral
The couples await the arrival of the casket bearing the remains of the late President Bush
The president did not attend the funeral of Barbara Bush in April when all the former first couples gathered to support George H.W. Bush. 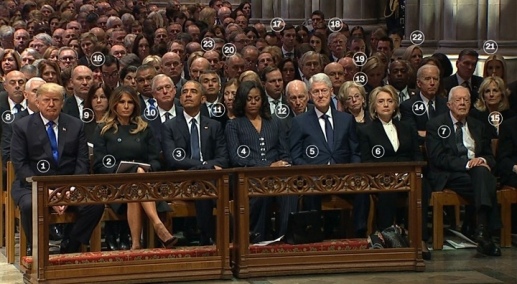 Melania Trump did attend however.

The late President Bush became like a father to Bill Clinton, whose biological father died three months before he was born.

Clinton defeated Bush in the 1992 presidential election but the two went on to form an unlikely friendship after Clinton left office.

It was President George W. Bush who got the friendship started.

In December 2004, after a tsunami devastated the coast of Indonesia, Sri Lanka, and Thailand, he asked the two to help in figuring out how to administer aid.

The couples held their hands over their hearts for the arrival of the casket carrying the remains of the former President George H.W. Bush

Bill Clinton visited George H.W. Bush at his home in Kennebunkport, Maine, as he did in June 2018 where Bush wore ‘Clinton’ socks

Their friendship was chronicled by Nancy Gibbs and Michael Duffy in their book ‘The Presidents’ Club’: ‘No relationship is quite like the bond between George H.W. Bush and the man who defeated him in 1992,’ they wrote. ‘Bush would go so far as to suggest more than once that he might be the father that Clinton had always lacked—a notion that the younger man did not dispute.’

And, in his eulogy Wednesday for his father, George W. Bush named a diverse group of friends the late president had made, including Clinton.

‘My siblings and I referred to the guys from this group as brothers from other mothers,’ he said.

The letter George H.W. Bush left Clinton on Clinton’s inauguration day went viral in the days after his funeral.

‘I’m rooting for you,’ the outgoing president wrote his successor.

A nation unites to mourn a warrior, a statesman and a father: Presidents and politicians come…