Dalton Harris opened The X Factor episode with Emeli Sandé’s Clown, followed by a performance by Acacia and Aaliyah where they performed the same routine they had previously given.

Fans were not impressed when Acacia and Aaliyah sang and rapped Stormzy’s Big for your boots, along with Skepta’s Shutdown.

The duo’s mentor, Robbie, has been away touring in South America for the past few weeks, so it is possible he wasn’t informed.

Viewers instantly took to social media to complain about the show’s decision.

“Haven’t the girls done this song about ten times already?? #XFactor. How am I still watching this show?” raged another.

A third huffed: “Acacia & Aaliyah need to go! How many times are they gonna sing the same songs over and over?! Give us a new song! #XFactor⁠.”

“If I’ve heard Acacia and Aaliyah sing this once, I’ve heard it a million times ffs #XFactor,” sighed another.

A fifth shouted: “SWEAR THEY SING THIS SONG EVERY PERFORMANCE, THEY’RE NOT GOOD, THEY SHOULDN’T EVEN BE ON IT #Xfactor.”

“Can you imagine if Stormzy is getting royalties for every time these girls rap his songs? He could probably retire now #xfactor⁠,” teased another.

X Factor 2018: Viewers raging as Acacia and Aaliyah sing the same song (Image: ITV)
Scarlett Lee followed up with a repeat performance of I Didn’t Know My Own Strength. 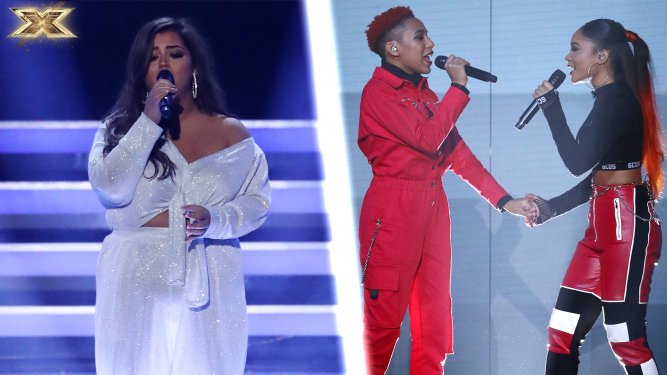 One viewer tweeted: “The same song that she performed at judges’ houses. Scarlett showing almost as much “development” on @TheXFactor as Acacia and Aaliyah. #XFactor.”

A third tweeted: “The same song AGAIN. ARE YOU SERIOUS #XFactor.”

“DO THESE GIRLS NOT KNOW ANY F**KING OTHER SONG!?! SRSLYYYYYY #XFactor,” fumed another.

X Factor 2018: Acacia and Aaliyah and Scarlett Lee were in the bottom two (Image: ITV)
The contestants were not able to pull the wool over viewers’ eyes as both acts ended up in the bottom two.

Scarlett and Acacia and Aaliyah had to perform once again in the sing off.

The X Factor continues next Saturday on ITV.